Miami Beach uses NSF 61 Trenchless Technology to Rehabilitate Cracked Water Main Under Canal
In early 2016, the city of Miami Beach, FL was faced with a cracked water main beneath a canal adjacent to Dade Boulevard, a major highway connection to the barrier island.

The water pipe travels under the Collins Canal and is in close proximity to power supply lines and other utilities. The fifty (50) year old pipe with several bends was severely degraded. Both longitudinal and circumferential cracking classified as #4 "significant" defects using PACP condition assessment criteria meant the pipe was in need of attention. Initially, the City considered abandoning the line entirely, but eventually decided that there was value in creating additional capacity and introducing it as a loop system.

A structural repair solution was sought that could be completed with minimal disruption of traffic and public inconvenience. The City considered the economic and social costs in time, money and disruption of three (3) separate solutions; those being CIPP, Directional Drilling and conventional excavation. Officials opted for a NSF Certified trenchless technology rehabilitation alternative which was minimally invasive and would satisfy associated environmental concerns. The solution called for using a CIPP lining to repair the water main. The liner was designed to be independent structurally, not relying on the host pipe for any strength or pressure capability.

Not only was the CIPP lining an extremely cost effective and time-saving procedure (the lining timeline was less than thirty days including chlorination and pressure testing), it restored the structural integrity of the affected water main without significant disruption of traffic, and other buried utilities. The lined pipe served to enhance the existing system by providing a "loop" and additional capacity to the existing water main system. 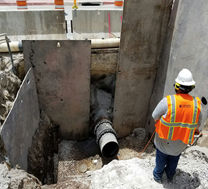